How easy is it to prioritize to act effectively?

Very many people have no idea what they want specifically. Especially in what order and priority. But everyone knows perfectly well what they do NOT want. On the one hand, this is a problem, and on the other, as always, an opportunity!

A list all the feelings you avoid, dislike, fear. In front of each, write under what conditions they occur. Then describe how it feels in the body. For example:

Indulation-anger, when I am pushed, something is forbidden to me, not allowed to do, limited. Sensations in the body - tightness in the chest, difficult to breathe, mandrazh in the hands and feet, lump in the throat, clutched teeth, tense neck.

Insometimes conditions and situations come to mind, and only then you can identify the feeling that arises with them. Also an option, write as it goes. Be sure to indicate the feelings in the body, this is very important!

After the easy part- descriptions of what you don't want - let's move on to the positive. By excluding one, it will be much easier to do the second. Now do the same about what you want, love, what you aspire to. For example:

Freedom, when no one expects anything from me, including myself, when I manage my time and move in the space where I want. Sensations in the body: easy and much breathing, legs and hands - springs, eyes burning, mouth smiling, back relaxed and flexible. 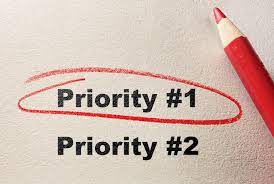 There won't be many items on each list, about 5-10. Then you need to prioritize these items, and as accurately as possible. This is what the article title is about. This is done either through ease or through sacrifice - depending on what is closer to you. For example:

This in programming, such a concept is the bubble method. Any language uses it when you need to rank anything, for example, make a list alphabetically. It's simple: take the first pair and compare its components with each other.

Wine or condemnation? Ummm, it's near, but guilt may or may not arise in response to condemnation, but it's still unpleasant. Don't swap places. And guilt or impotence? Guilt is worse, so everything stays and turns out as a result:Are you curious about how the mind works?

As with positivity, that's where we need a sacrifice. What are you sacrificing for what? For example, we have this list:

Feeding to the Pack

Ye you sacrifice tenderness for the sake of freedom or vice versa? Is it better to be free and lonely or to belong to your pack, doing everything with them together? Hell with it, with that aesthetic, just to earn more / save, or better to do as beautifully as possible, but stay with less money?

This is the method of bubble or sacrifice. Next, it is very important to honestly and carefully study the second layer of this information. Are your negative feelings really so hateful and you avoid them? For example, anger is the release of energy that is accompanied by a feeling of real power. It can be oooh

A tenderness, which is possible only with trust and openness, does not make you dangerously vulnerable? Does wealth not make you a target for other people's arrows? Does not freedom also smell of responsibility? Aesthetics are not expensive? Perhaps these ideals should remain a dream, and in real life well, theirs?

Attest the double-bottom items in the opposite list. For example, in the desired feelings there may be anger, and in undesirable - wealth. Is it necessary to be surprised if you still do not get rich, but you are angry with enviable regularity?

By prioritizing all your favorite and hateful feelings, seeing the conditions under which they arise, and how they are felt in the body, you will get out from under the water almost the entire iceberg of your subconscious motives. You will see quite clearly and clearly what, how, when and why you do and do not do.

As this is a great start for relief and change. Of course, it can be a shame, you may well be upset. However, you will also get fun, not to mention gaining control, and this is a pleasant feeling of strength. So 2 against 1 according to our own system. Go ahead!

Ask a free question Book consultation with Andrej Jagodzinskij
[[ article.dislikes ]] [[ article.likes ]]
City Pros gives $5 to all clients to book any services on City Pros. Get $5
Popular questions:
Other articles you might be interested in: