Psychic health is one of the main factors that are necessary for a person to live a full life. The ability to properly evaluate themselves, constantly develop and move forward, build a career, create a family, make friends, realize their opportunities and potential in various fields. From a scientific point of view, mental health is a state of well-being that is assessed by a number of parameters.

Insimportance to mental health are mental disorders. They manifest themselves in various forms and with different intensity, but a common feature is the presence of deviations from the norm. This may be an initially incorrect perception of a person and individual situations, disorders that arise during the reaction of the psyche to certain events, or the presence of hallucinations - images and sounds that are not real.

Psychia disorder is not always a disease. It can manifest itself weakly, bringing some discomfort to a person, while he can go to work, build a family, raise children. Deviation in the form of isolation, periodic bouts of aggression, depressive mood or self-doubt can be perceived by himself and others as a feature of character. Such a misconception is dangerous, since the condition of a person with a mental disorder worsens as he develops. In as a result, it can be dangerous for himself and his entourage. 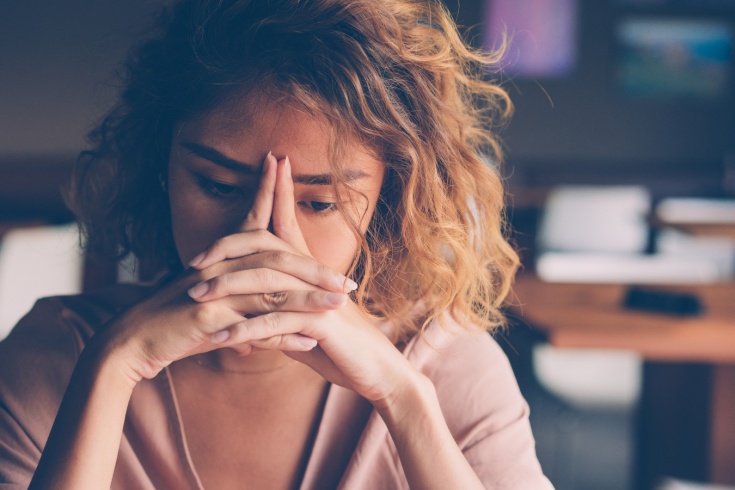 Who cares to know what are the causes of panic attacks ?

Thy order for our readers to have the opportunity to determine in time the presence of a disorder in themselves or their loved ones, we have studied in more detail their most common types and methods of manifestation.

Psychic disorders are quite difficult to diagnose in the first stages, since the human psyche is not yet fully understood, and the methods are not always effective. Most disorders have a number of characteristic symptoms, some of them can coincide in several species at once.

I most common are:

A person is in a bad mood all the time, he is not happy with anything and is not interested in anything. There is drowsiness, a feeling of weakness, a person sleeps a lot, but wakes up even more tired. With deterioration of the condition, he begins to slow down thinking, reactions slow down. With prolonged depression, he can significantly lose or gain weight.

Part of the symptoms are similar to depression. It's a bad mood, apathy and loss of strength. But there are differences. With this type of disorder, a person can fall into a state that is the opposite of ordinary depression. Instead of drowsiness, insomnia occurs, movements can become sharp, and passivity develops into aggression. Also the difference is the fact that passivity and bad mood can not always accompany the course of this disorder. Disperception of oneself and others, feelings of guilt and worthlessness can breed aggression without depression.

The danger of these two disorders is that they often cause suicide in both adolescents and adults.

This is the inability of a person to adapt to changes that are accompanied by depression or aggressive behavior. Regardless of how this type of disorder manifests itself, a person cannot fully work, lead a life, communicate with others. It can arise both as a result of a negative incident (death of a loved one, illness, loss of work) and due to positive changes (moving, entering a university, moving to a new position, birth of a child).

Ih there are several varieties that have the same manifestation - a person has a strong and causeless feeling of anxiety. The pulse quickens, speech becomes fast and confused, sweating increases. Anxiety disorder can be generalized, that is, there is no specific trigger that would trigger such a reaction, as well as local - with the presence of such. An anxiety attack can begin suddenly or when faced with the object of the phobia - insects, the need to fly, swim, etc. Fear of a negative reaction of society makes a person avoid social contacts. An attack of anxiety begins when it is not possible to avoid them.

Can occur as suddenly as an anxiety attack or have a specific trigger. A panic attack is more difficult than anxiety. Chest pain, muscle spasms, nausea and vomiting can be added to the rapid heartbeat. A person experiences a feeling of fear or horror, the attack can last from 10-20 minutes to several hours.

This type has manifestations that are similar to the symptoms of somatic diseases. In this case, a person can feel pain or experience other sensations (fever, discomfort in different parts of the body) without real damage or disease. A person is in an unchanged state (meaning drugs or alcohol), but cannot get rid of sensations. They can occur both with a certain periodicity and be permanent.

Dependence occurs on the active substance. In the case of alcohol, this is ethyl alcohol, with drug dependence, the substances are different. With such a disorder, two dependencies arise at once: mental and physical. Mental is that achieving a sense of comfort occurs in a person only after taking a certain substance. With physical, tolerance to the substance gradually arises, because of this, it is necessary to constantly increase the dose. With a decrease in dosage or discontinuation of taking substances begin to break.

Accompanied by visual, auditory and other types of hallucinations. A person does not distinguish them from reality and begins to actively interact with objects, hear voices and talk to them, feel extraneous tastes and smells. Visions and reactions are always negative, people with schizophrenia believe in conspiracies, often suspect their surroundings of wanting to harm them. This provokes a depressive mood or aggression.

This includes anorexia, bulimia, and obesity. Alover, the symptoms of these disorders are different, each of them indicates an appetite disorder that entails the consumption of calories significantly higher than normal or vice versa. As a result, disturbances in the work of different organs can be added to emotional discomfort

People with this type of disorder are characterized by impaired perception of their own "I", as well as an assessment of the people around them and their actions. This entails an inadequate reaction, which can be passive when a person avoids social contact, or aggressive in the form of insults or violence

Psyhiathria is also known a number of syndromes that are much less common, but are characterized by an unusual manifestation:

Despite the different shape and severity of the manifestation, disorders can have the same cause.

The causes of occurrence are divided into endogenous and exogenous. The difference is the peculiarity of the origin of the root cause, which caused the violation.

Endogenous occur due to internal factors. These include disorders caused by genetic predisposition, gene mutations, insufficient level of production of a certain group of hormones.

Exogenic are external factors. These include psychological trauma, stress, and physical injuries to the brain, its damage by chemicals or infections.

One and the same traumatic event can affect different people differently. The presence of a reaction and its intensity is associated with the initial level of psychological health and the ability to withstand stress.

Only a doctor can diagnose the disorder. Therefore, if you notice one or more symptoms in yourself or your loved ones, you should contact a psychotherapist. A specialist will be able to conduct screening and testing that will show the nature and level of deviations, on their basis prescribe treatment. In difficult cases, the psychotherapist can transfer the patient to a psychiatrist.

Supporting psychotherapy and drug treatment are used to treat mental disorders. Sessions with a psychotherapist help not only to identify the ailment and its cause, but also to accept its presence, adhere to the prescribed treatment tactics, and also rehabilitate after recovery or during remission.

Medicamine treatment in most cases is based on the use of antidepressants, antipsychotics or a combination thereof (with bipolar disorder). It is extremely important to adhere to the schedule and dosage of prAnd do not change medications on their own.

The most effective is the approach that involves a combination of drugs and sessions with a psychotherapist.

Psychological assistance in Ukraine and Russia

I can use our service to provide a specialist for consultations. Psychotherapists and psychiatrists consult online, so you can not limit yourself to your locality, and the sessions themselves will take place in a convenient atmosphere for you.